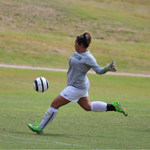 If a stranger were to ask you what your passion is, what would you reply? Would it be a hobby such as taking photographs or a career path like becoming a lawyer? Chasely Matmanivong is lucky enough to have both in one. When asked that very intimidating question, she simply said soccer. I was fortunate enough to find out why as I did a little investigating into the so-called Judson “soccer life”.

A couple of weeks ago, I attended my very first soccer game. To be brutally honest, I went out of boredom and because my friend wanted to attend. After a half hour, I was hooked. The desperate running from one end of the field to another. The thudding of bodies as they collided in reach for a ball. The frustration clearly etched on the loser’s team once it was all over. All derived from the competition that is college soccer.

It is addictive. When Chasely was eight years old she discovered that. Her mother signed her up as a hobby for her to have. and a decade later shows up at all the games to cheer her daughter on. Like most athlete stories, she ended up falling in love with the game. Her competitive, and sometimes aggressive nature comes into play in any soccer field.

A hobby turned passion earned her a scholarship and spot on the team. Not to mention, Chasely’s immediate connection to the rest of our talented team which played a big role in her decision to attend Judson College. Being able to bond and collaborate with your team is a key characteristic of the game. They inspire her to do what she does best every day. Another inspiration is one of  her role models Sydney Leroux, who plays for the National Women’s Soccer League.

After witnessing first hand what this game means to people like Chasely Matmanivong, I can say this sport is undoubtedly not just a game to play. It is also a lifestyle.