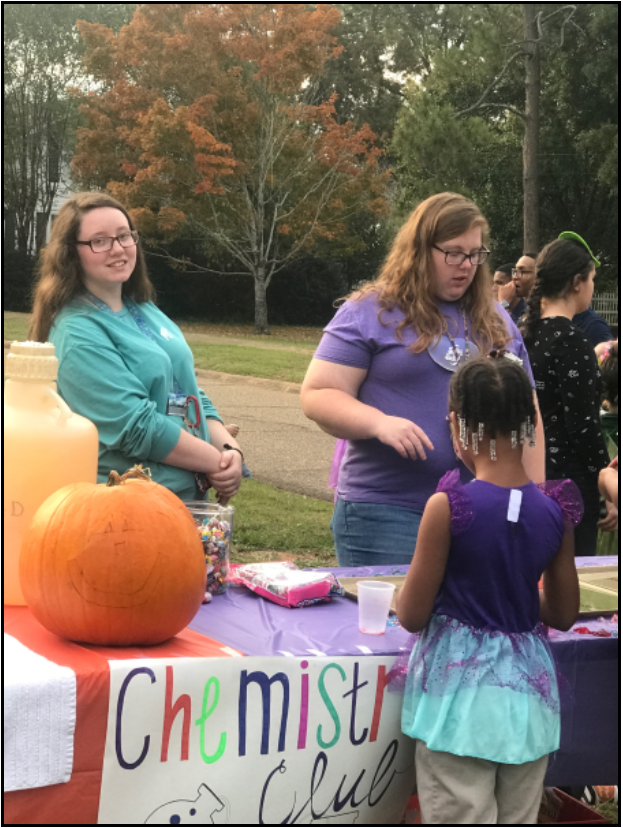 What do October 31, Judson College and the entire community of Marion have in common? Treats on Bibb Street, of course!

Treats on Bibb is a wonderful time of the year where the Judson community holds a safe trick-or-treat event in Marion for all the children of the community. Students who have been at Judson for a while know Treats on Bibb is a community tradition. But for the Freshman, they got to experience the annual event first hand.

The first freshmen Emma Veitch, did not understand what Treats on Bibb was all about, but once she saw and helped run a booth, she finally understood. Veitch helped run the English club’s booth, which was a cute game of throwing a bean bag at a dragon and trying to knock it over to. “Seeing the children all happy when they got their candy was my favorite of the whole evening and I cannot wait till next year, so I can do it all over again.”

Kaitlyn Smith, had never heard of Treats on Bibb and was not sure what is was, but to her it sounded like fun. She dressed up like a princess out of a fairytale and went to work for the English club. At the end of the night Smith felt really happy for what she did for the children of the community. “I enjoyed Treats on Bibb, because it allowed me to participate in a safe trick-or-treating environment for all of the kids in Marion.” 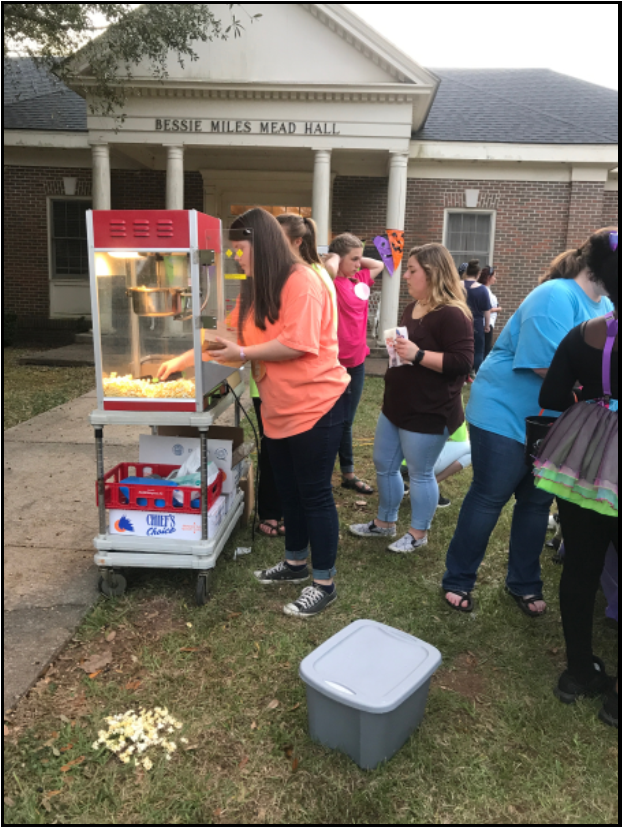 Next I spoke to Madison Egnew. When she first of Treats on Bibb, she had no idea what the heck was going on, until that night. Egnew helped with Education Department’s booth, “we had cut out different size circles and mouth pieces so the children could make their own emoji.” This was her favorite part of the night, watching all the kids have fun made her night.

Another freshman, Deana Pugh is no stranger to how Treats on Bibb works. Even though it is not like the one she helps with in her hometown, there are similar. Deana dressed up as the Mad Hatter from Alice in Wonderland, but she did forget her hat so she was a little upset about that, but the Equine Science club had a “unicorn” named Bucky, who was held by Jennifer Hoggle, which made up for the missing hat in Pugh’s eyes.

The next freshman was Lela Ball, who dressed up as a zombie looking thing, she was not exactly sure what she really was. Ball said “The first time I heard someone mention Treats on Bibb, I thought we were going to be making goods or something like that, but when I found out I was really excited.” Ball helped with the Music Departments booth, which was musical chairs, and with the English club as well. Her favorite part of the night was helping run the other booths set up and hanging out with all my friends.

Lastly AJ McKay helped with the Music Departments booth. It was very different than what she had originally thought the night was going to be. “I imagined it was going to be like trick-or-treating on the square, but it was on Bibb Street.” She really enjoyed seeing all the people just get to have fun in a safe environment.”

Now that the freshmen have gotten used to the wonderful ways of not Judson College and how the students, faculty, and staff spend their Halloween night every year a fun place for everyone to just come and hang out with one another and see the people they don’t really get to during the semester, but also a safe place for the children of the community and their families.  Hoping all the freshman have even a better experience next year, because next year they will be the ones showing the freshman the ropes. GOOD LUCK FRESHMEN!